I did find something cool! A couple weeks ago I said I wouldn't post anything more about the Microsoft Band (unless I found something really cool).

The Internet of Things and Houston weather have one thing very much in common.  They are sooooo hot right now!  Inspired by this, I have been thinking a lot about outdoor projects that interact with the cloud, for example my recent Spark Core powered Hot Tub monitor.  This trend is only just now beginning to take off with plenty of exciting projects forming in the space including Rachio’s IoT sprinkler system and this most excellent homebrew soil monitor running on an Intel Edison.  These examples highlight how we can operate on data to produce interactions and inferences which apply to the physical world.  This, I believe, is the core of IoT’s ability to change our lives in the future.

I propose that if the Internet of Things is the future, then projects which incorporate it bring the future to those “things” involved.  Deriving from my personal passion for music and entertaining, I decided to explore how IoT could assist in amplifying those passions.  As a software developer, there is no better feeling than creatively applying our talent to produce extensions of our interests which serve to enhance our experience.   Today’s project combines an array of seemingly disparate technologies to produce a voice-controlled music entertainment system combined with flashing lights and a good old cloud-enabled Excel report for analyzing playback data.   I call it, “Hot Tub Time Machine From the Future”.

All code with instructions on use and configuration can be found in the MusicNet repository.  Simply follow the instructions in the Readme and deploy the Windows Phone project to your device.

We leverage the PiMusicBox project to turn the Raspberry Pi into a network enabled Jukebox. ...

Voice-controlled music playback with blinky lights and Azure-powered Excel reporting is awesome!  Now the idea is how to take it further!  What if we took the result of the current playing track and displayed it along with current listener satisfaction on a projector of sorts allowing for dissatisfied listeners to upvote or downvote in real-time?  What if Cortana controlled the hot tub itself?  What if the music genre changed depending on the temperature of the hot tub?  What if the “Hot Tub Time Machine” knew what the best music was for the mood based on weather data?  Feel free to leave your suggestions in the comments.  Until next time, Happy Hacking!

This project makes use of a PiMusicBox music player running on an IoT device (Raspberry Pi) that we can control from Windows 8, Windows Phone, XBOX One and the Microsoft Band.

We can do Play, Pause, Next, Previous, Volume Up, Volume Down and search both local and online music from each of those devices. On Windows Phone and the Microsoft Band, those commands can all be executed using speech. Even more exciting is that whenever a track changes from any devices the new track information shows up on the Microsoft Band.

We also connected the IoT device directly to Azure (no client software involved) to keep a history of every track that plays. And just because we could, we even created an Excel dashboard that shows the most popular tracks played by artist over time.

The project is built on top of Pi MusicBox and Mopidy in addition to the Web Application Template.

The photo below shows of all the components working together: 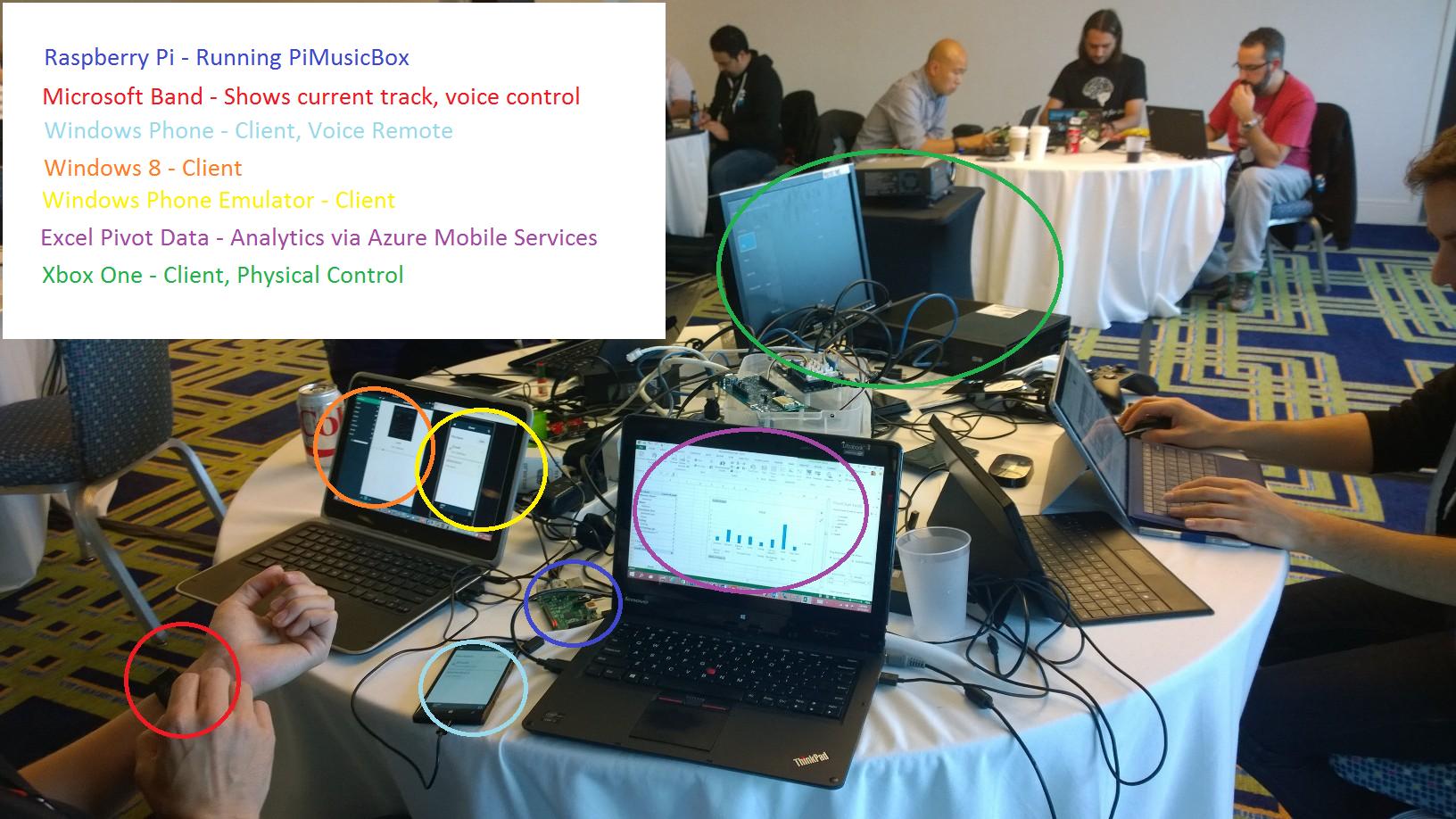