It's been a while since we've highlighted one of the cooler learning to program tools, so when I saw Rachel McCollin's recent post, Introduction to Scratch, I knew I had today's project.

You've all heard of Scratch?

Scratch is a programming language that makes it easy to create your own interactive stories, animations, games, music, and art -- and share your creations on the web.

Some of the other times we've highlighted Scratch:

One of the highlights of my week is the Code Club I run at my local school. Every Thursday, I spend an hour with some budding coders helping them learn the fundamentals of code.

Along with other code clubs and similar organizations and groups, our group started programming using Scratch. Scratch is an online tool which helps kids learn the fundamentals of how code works and lets them create their own animations, games and more.

As well as being a tool, Scratch is a community: users can share their projects, make copies of each others' and 'remix' them, which is a bit like forking code in GitHub and consists of copying someone else's project and adding your own improvements or changes to it. Instead of expecting learners to write their code from scratch, Scratch provides them with a set of blocks: lines of code which they drag into place to create their code.

In this series of tutorials I'll give you a detailed introduction to Scratch and how to use it. This first part will give an overview of how Scratch works and its main components and concepts. I'll cover:

First, here's how to get started with Scratch.

Getting Started With Scratch

Scratch was first developed in 2003 at the Massachusetts Institute of Technology. It started out as downloadable software but is now an online tool. It's completely free and is funded by grants from various organizations, including the National Science Foundation, Microsoft, Google and the LEGO Foundation.

Every time you create something in Scratch, you'll be working on a project. You can create as many projects as you like, share them and copy them. Each project stands alone and can't be linked to other projects.

Scripts are what make your assets do stuff in Scratch. They consist of blocks of code that you drag into position on the canvas, and come under ten categories: 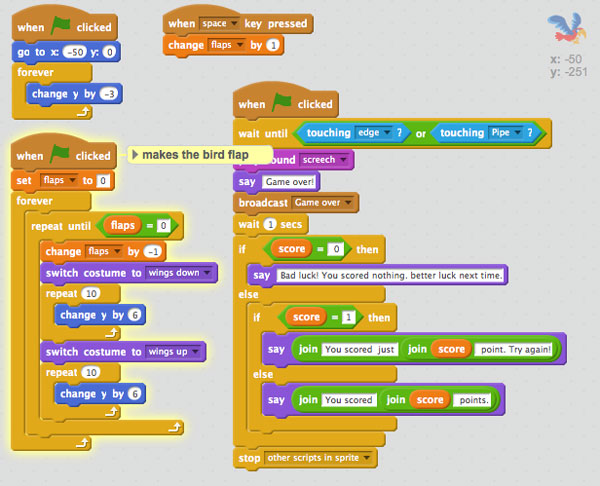 Scratch is a fantastic, free tool that helps kids (and adults too!) learn how to write code without having to type the code out. It means they can learn how code is structured and what it does without the frustration of having to learn syntax and helps them get started quickly.

It's also lots of fun to use and has a huge community of users whose projects you can view and copy, which will help you learn in a practical way.

In this tutorial you've learned about how Scratch works and the main components of a Scratch project. As you work through this series you'll learn how to use all of these components to create your own projects. In the next part we'll start by looking at creating your stage and sprites.